skip to main | skip to sidebar

Surfing blogs from this site have been copied to SurfingSites.net
Future blogs on surfing topics will be posted there.

The sea between Australia and New Zealand, the Tasman Sea, is affectionately known as "the ditch".
It gets the southern winter swells from the Southern Ocean and these wrap nicely onto the east coast of Australia but they blast the west coast of New Zealand.

See the approaching swell for this area in the model at:
polar.ncep.noaa.gov/waves 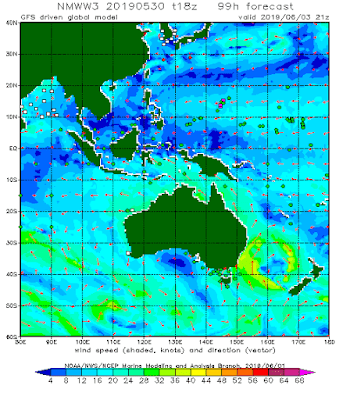 
Our favourite forecast for surf in Sydney (and most of Australia) is:
Seabreeze.com.au

LaJolla is handy for forecasts, you can pick a graphic for anywhere in the world:
lajollasurf.org/gblpac.html

There are links to other nice people that provide
this information:
winhelp.com.au/makesurf
bruce-white.blogspot.com/search/label/forecast

Site by WinHelp IT Editing winhelp.com.au

Get a SUP that is too small to paddle standing on, but that surfs like a mini mal or a longboard
Get a paddle that is short enough to paddle holding the top end while kneeling down (telescoping paddles may be OK),
Get a surf that is too bumpy to SUP on,
and you have Surfing Melanesian style: kneelupps.info
OR Facebook:
facebook.com/group